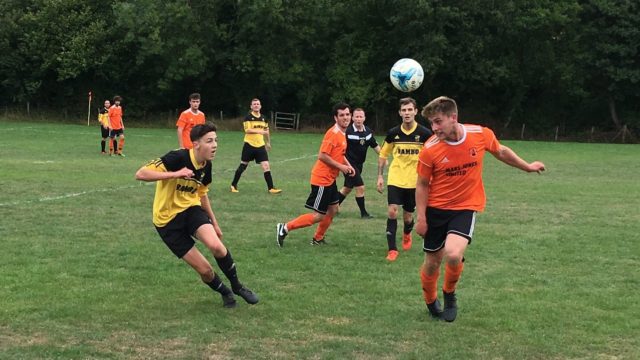 With a week to go until the much anticipated start of the league season, Machno rounded off their pre-season with a trip to age-old adversaries, and reigning Normac Precision Engineering Premier Cup holders CPD Llansannan.

Machno manager, Eric “Bach” Richards, had singled the fixture out as a reference point in determining how far the new-look Yellows squad had come over the past few weeks, knowing that a trip to ‘Sannan always guarantees an extremely competitive match.

Machno brought along a strong squad, though missing some familiar faces, and were also buoyed by a good travelling support including the infamous “Machno Mafia” ladies of course!

The game got underway and Machno made a familiar start to watchers of recent games, as they were immediately on the front foot.  In the very first minute of the match some lovely pacy link up play between between cousins Luke Roberts and Callum Parry led to the ball finding the feet of centre forward Owain Jones, who in turn nipped in front of the centre half, rounded the keeper but was just unable to find the net from an extremely tight angle.

Jones made a very promising start to the match up front, causing the Llan defence much unease, and prompting the first corner of the game after 5 minutes.

There was a blow to Machno after 10 minutes, when influential midfielder Josh “Frank” Francis was forced off with an ankle injury after an inadvertent clash with the referee!  No doubt the “man mountain” would have received plenty of stick on Saturday night, having been forced off by the barely 5 foot tall official!  Arwel Lloyd came on to replace Francis, with club stalwart Damien Eyre switching into the central midfield role.

The first quarter of the game continued to prove a very tactical affair, with both sides probing and checking each other out like a pair of heavyweight boxers.  Luke Roberts had a left-footed volley fly wide on 14 minutes, whilst there was a clear warning for Machno, when a Llansannan corner was met by a free header, which sailed just over the bar.  During this period of play, Machno’s newly-signed goalkeeper Declan Bailey looked very assured around his new team-mates, and was sweeping up very confidently behind the back four.

Machno’s high pressing and impressive work-rate, particularly up front, continued to cause the Llansannan defence problems, and the deadlock was finally broken on 23 minutes when Luke Roberts was able to take advantage of a slightly loose ball and chip the keeper to open the scoring. 1-0 Machno.

With the lead pocketed, Machno’s confidence grew and there was some lovely link up play on view, with Jones central to most of it.  Machno skipper Jamie Williams was also having a highly influential game and was full of running whilst earning several corners for the Yellows.

One such corner, on 37 minutes, nearly saw the lead doubled as it was met by the head of rugged centre-half Ian “Cacens” Griffiths, but his header flew over the bar.

Machno did eventually increase their lead on 40 minutes, as a pinpoint Rob Lloyd pass into Callum Parry was then fed into Jamie Williams breaking into the box, as the ball broke free Owain Jones was on hand to calmly slot home from 12 yards. 2-0 Machno.

It would only be a further two minutes before Machno gained their third goal, and again it was Jones who provided the touch of class to find the net.  A lovely left wing cross from Arwel Lloyd was swept int the corner in one cool swing of the left boot from the tall centre forward.

3-0 to Machno and a very satisfying half time lead.

As the second half got underway, there was again a slightly familiar feel as it was the hosts who came out on the front foot.  Just two minutes into the second period and a Llansannan corner was headed goalwards, but was cleared off the line by Arwel Lloyd who was fortunately protecting the near post area.

A minute later and another Llansannan corner was met by a free header which flew over replacement goalkeeper, Luke Roberts’ crossbar.  It was a clear warning to the Machno men that they could not afford to be caught cold, and risk giving up a much sought after clean sheet.

The Yellows did however weather this early storm, and on 50 minutes were 4-0 up.  An incisive pass from deep-lying central midfielder Sam Thomas found the feet of Owain Jones, who finished with aplomb from the left edge of the Llansannan area, to complete his hat-trick.

Three minutes later and Jones would net his fourth goal of the game and Machno’s fifth.  With confidence now obviously oozing through his veins, the former Welsh Schoolboy international struck with an absolutely sensational dipping volley from 25 yards. 5-0 Machno. 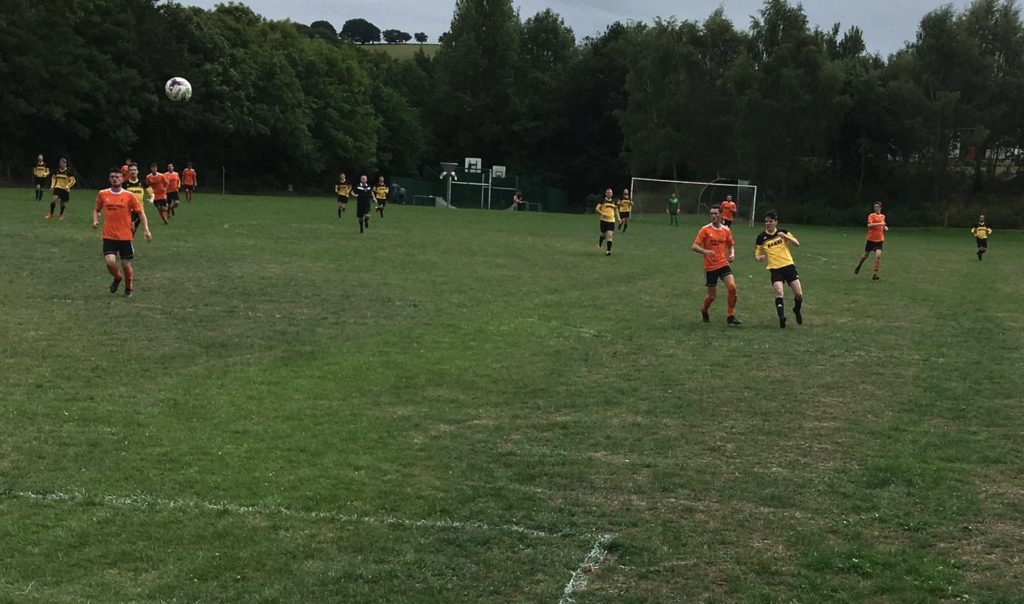 To Llansannan’s credit they continued to work hard on getting back into the game, and a Tom Lewis effort was sent narrowly wide of Roberts’ goal on 58 minutes.

Machno, though, were still in the ascendency and wanting more goals!  Callum Parry sent a good long range effort over the bar on 62 minutes, and three minutes later drew a phenomenal point blank save from the Llansannan keeper when meeting an Arwel Lloyd left wing cross with a powerful effort on target.

The introduction of Lloyd’s 16 year old son Dion ensured that there was not going to be any respite for the Llan defence, as the exciting youngster had his own long range effort sail just wide followed a few minutes later by a lightning break down the right and a delicious ball across the face of the goal.

Machno were certainly enjoying themselves by this point, as no doubt were the ever-vocal Mafia, and perhaps the “icing on the cake” was delivered in the 69th minute when Callum Parry despatched a sublime overhead kick into the top corner of the net!  It was a simply sensational moment and brought about wild celebrations from the Yellows! 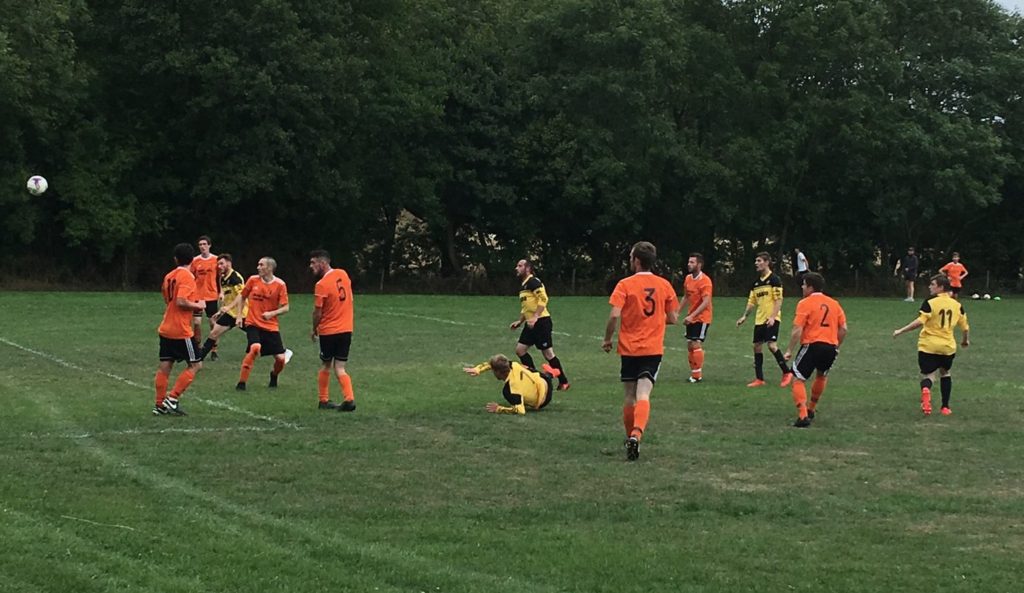 With the scoreline now reading 6-0 in favour of the visitors the remaining 20 minutes was played out with a bit less incident, and Llansannan again came close to scoring with a header from a corner.

The goalscoring finally came to an end in the 83rd minute, and it was fitting that it was down to seasoned Machno hero Seb Owen.  The quiet unassuming centre half rising up at the back post to meet a Jamie Williams free kick, which flicked off his shoulder, fooling the goalkeeper and trickling over the line at the far post! 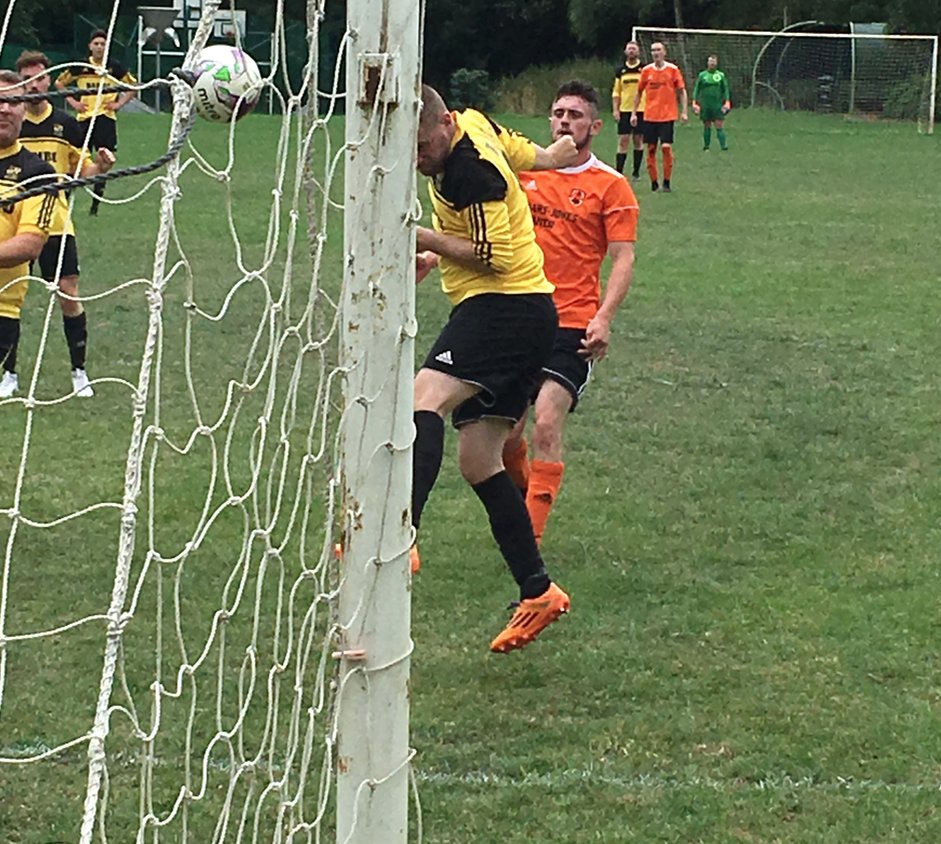 Veteran Seb Owen gets his shoulder to the final Machno goal

A 7-0 victory for the Machno men, and most importantly a long overdue clean sheet just before the start of league fixtures.  It was suggested, on social media, that the Llansannan side were under-strength but this still could not take away from the fact that the football on display had once again been incredibly easy on the eye, and the four goals despatched within an hour by Jones along with Parry’s stunner would grace any football match.

And so it begins. The league season will get underway with a trip to newly-promoted Rhuddlan Town next Saturday, which will undoubtedly present an extremely tough task for this new-look Machno squad.

One thing is assured, and that is that the management team of Richards, Jamie Williams and Steven Berry will certainly have the boys fired up for this one. COYY.