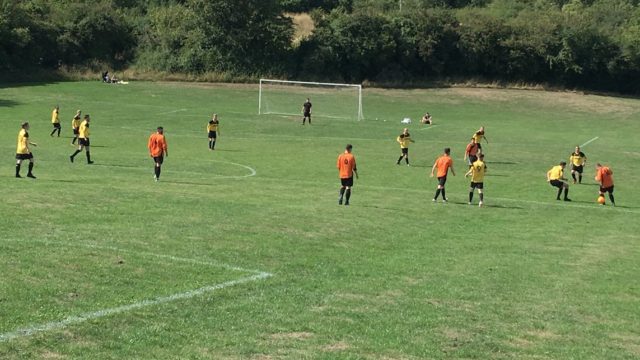 Machno’s preparations for the new season continued with a visit to regular pre-season opponents, Llysfaen FC, and the famous Banana Pitch.

A strong squad made the journey, with many of the young new signings having their first experience of the unique pitch.

Machno started the match in a vibrant attacking manner, much the same as in recent games, and were soon ahead as Callum Parry broke free to open the scoring after 12 minutes.

The same sensational attacking talent doubled the Yellows’ advantage on 20 minutes. As the ball broke to Parry midway into the Llysfaen half, a stunning burst of acceleration saw him beat three defenders before rifling a shot past the Llysfaen keeper from the left hand side of the box. 2-0 Machno.

Four minutes later Parry came close to completing a quickfire hat-trick, as he met an excellent right wing cross from young Dion Lloyd. Unfortunately the effort sailed over the bar.

The watching “Machno Mafia” did not have to wait too long before being able to cheer a third goal, as Luke Roberts smashed home following a great pass from Josh Francis. It was typical of Machno’s recent flowing football, that the play had begun from a rolled out pass by the keeper and had progressed to the opposing box in a matter of seconds. 3-0 to the visitors.

From the restart Llysfaen showed that there was still a lot of football left in the game, as a promising 25 yard effort was saved smartly by triallist goalkeeper Adam Redrup.

A few minutes later Callum Parry earned his well-deserved hat-trick when finishing off from 12 yards, following good work on the right wing by the speedy Luke Roberts. 4-0 Machno.

A fifth Machno goal soon followed, and was just reward for highly talented teenager Dion Lloyd. A punt upfield from Machno stalwart Gaz Griffiths, who was having a very assured game at the back, brought about a brave aerial challenge from Luke Roberts with the Llysfaen keeper, as the ball broke free Lloyd was on hand to finish calmly.

A good half from the Machno men, and a 5-0 lead at the interval.

As the ever young referee, Caerwyn Davies, set the second half underway, Llysfaen were quick out of the blocks and were obviously looking to gain a quick foothold back in the game.

A good long range effort in the 47th minute, looped just over the Machno crossbar, as warning shots were fired.

The ensuing early period of the second half saw an even balance with Llysfaen gaining territorial advantage, though Machno still looked dangerous on the break.  A Sam Thomas volley, creeping narrowly wide, being Machno’s closest attempt of the period.

On 58 minutes, Machno were presented with the opportunity to further extend their lead from the penalty spot, as young centre forward Owain Jones was brought down in the box.  The Llysfaen keeper may have felt slightly hard done by with the decision, but this made no difference to Luke Roberts who stepped forward and coolly slotted home the spot kick.  6-0 Machno. 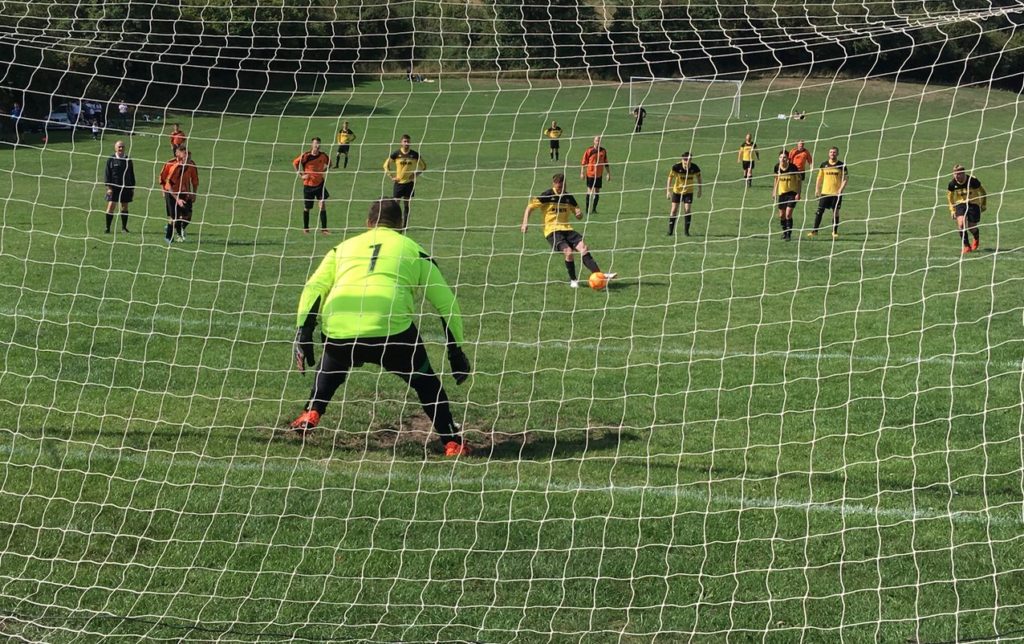 As the hour marked passed, great credit must be paid to Emlyn Jones’ young Llysfaen side, as they responded very positively to the disappointment and truly gained a foothold in the game.

The experienced manager must have been working on shooting drills in training, judging by some good long range efforts from the side in orange.

One such effort on 66 minutes, brought about another smart stop from Redrup in the Machno goal.  However, the debutant keeper had no chance just a minute later as the Llysfaen number 14 smashed home a half volley from the edge of the box, which arrowed into the top left corner. 6-1 Machno.

In the 69th minute Llysfaen were again rewarded as another well-timed volley, from the centre of the Machno box, was despatched following a sustained period of pressure.  6-2 to Machno now, and game on!

There has been much to get excited about surrounding new signings made by Eric Richards’ side, and none more so than the ever impressive Callum Parry.  The Trefriw youngster gained his fourth goal of this match on 73 minutes, as a well worked corner routine with Jamie Williams saw Parry rifle home from the left edge of the box. 7-2.

Three minutes later, Machno’s eighth goal of the match was secured by another quality new signing Josh “Frank” Francis.  There was obviously only one thing on Frank’s mind as he stood over a 20+ yard free kick just outside the Llysfaen box, and sure enough his Beckham-esque right foot curler was despatched smartly into the top corner of the Llysfaen net.  8-2 Machno. 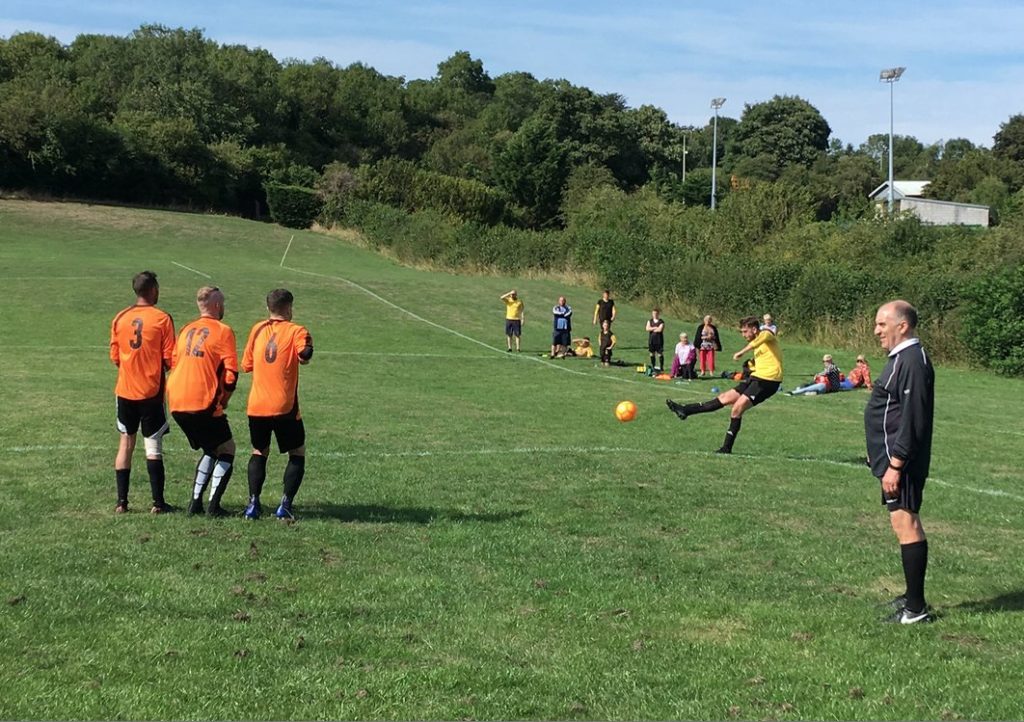 With ten minutes to go there would still be time for plenty more goals in this encounter.

An 80th minute Llysfaen free kick on the halfway line, was launched towards the Machno box where it was met by the head of the veteran Gaz Griffiths.  Unfortunately the Machno legend seemed to have forgotten that he was now playing a far deeper role than his many years of terrorising opposing defences, and his back header looped over the head of the unfortunate Redrup and into his own net. 8-3 Machno.

The strength in the Machno squad for this season was further demonstrated by the fact that Welsh Schoolboy international, Owain Jones, had come off the bench for the second half.  Penmachno-native Jones’ great-grandfather was actually a founder of the club, whilst his grandfather and father had both proudly worn the Yellow shirt.  The fact that Jones himself wants to do similarly is a massive boost for the club as he brings Welsh Premier League experience from his time at Llandudno FC.

Jones would bag the final two goals of the game in the 82nd & 83rd minutes of the contest.

The first of these was gained from a towering header, at the backpost, from a pinpoint Jamie Williams corner to make it 9-3.  Jones then rounded off the scoring, a minute later, with a predatory finish in the box following a Callum Parry centre. 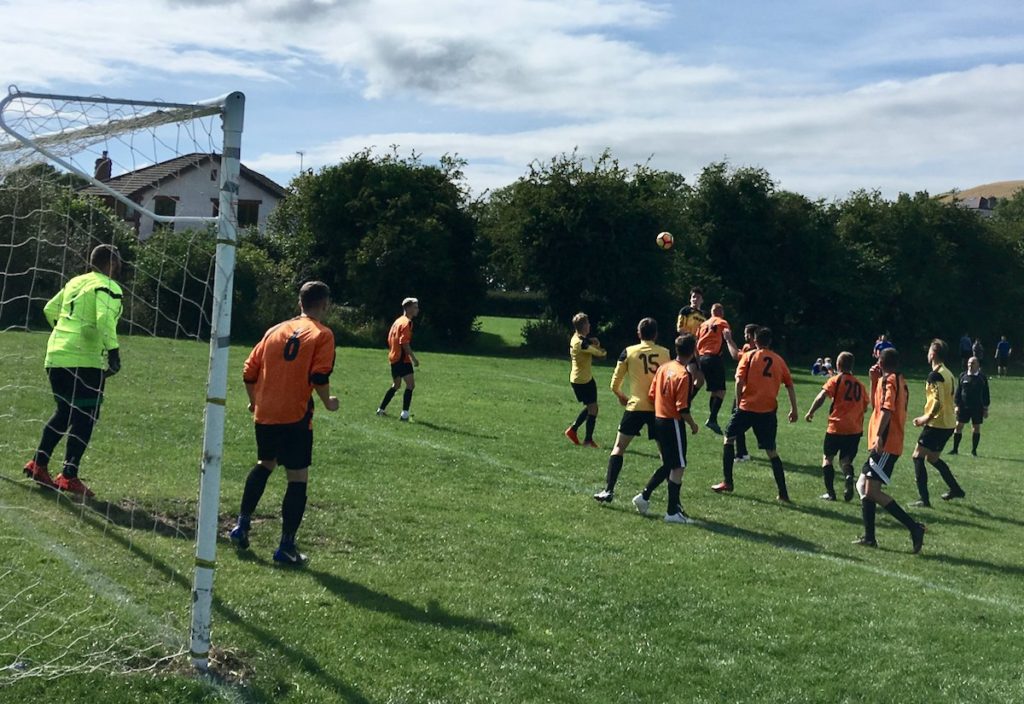 Another very satisfying performance from Machno, with the plethora of exciting attacking options nicely balanced nicely with a combination of experienced heads behind them.  As always, huge thanks goes out to Emlyn Jones and his Llysfaen side for hosting us, and we wish them the very best of luck for the upcoming league campaign.

Machno now move on to next week’s final pre-season friendly and a trip to old foes Llansannan.  COYY