In the 1929-30 season, Penmachno F.C. joined the Vale of Conwy Football League, competing against teams such as Llanrwst Town, Betws-Y-Coed F.C. and Cwm Penmachno Rangers F.C.

But 1947 saw two of the local teams Penmachno F.C and Cwm Rangers F.C merge together, and so, Machno United was formed. Finishing 3rd in the Vale of Conwy League in their first seaon, above teams such as Llandudno Reserves and Colwyn Bay Reserves.

In 2002, Machno United completed a cup double with a 2-1 win over Llanrwst United Reserves for the ‘John Hughes Challenge Cup’ which they added to the ‘Wynnstay Trophy’ they won at Conwy a fortnight earlier against league champions Llanffairfechan Town.

In 2004, Machno United joined the Caernarfon & District League where they competed until they became league champions in 2012, where they then transferred over to the Vale of Clwyd & Conwy Division One league and where they challenged for league domination.
Machno went on to win the league title after a long hard first season back in the Clwyd Vale League, making them back-to-back league champions. Machno also made it a double winning season after securing the ‘REM Jones Cup’ against league rivals FC Tudno.

The Vale of Clwyd & Conwy Premier Division is the latest challenge………

May 27th 2009, marked the blackest day in Machno history, as the Machno United family lost a vital, exceptional and influential part of their squad.
Lance Corporal Robert Martin Richards (or also known as RAMBO by his team mates) lost his life whilst he was serving as Second-in-Command of a Viking All-Terrain Vehicle when he was mortally wounded in a district in central Helmand, Afghanistan, on 22 May 2009.

Rambo was immediately evacuated to the UK, many would not have survived the flight home but, testament to his character, Rambo battled against his injuries for five days, but despite the best efforts of medical staff and his own extraordinary fight he died of his wounds on 27 May 2009.

Whilst being home on leave, Rambo’s biggest love was Machno United Football Club, and he was always first on hand to prepare the pitch for the forth coming season, and to also gear up the lads after a long break between seasons. His irregular and almost eccentric training drills, always left the squad feeling slightly exposed to “The Marine” way of life! And whilst making sure he pushed every single player in the squad to their maximum potential he always ensured that adequate amounts of fluids where consumed by expressing his famous words of “Little sips!” which still echo through the squad and the training sessions today!

One training session in particular stands out from the rest, as once again, Rambo pushed the lads to the extreme, as he had them carrying each other, on each others backs! And whilst no one in the squad was prepared and ambitious enough to carry the Machno United keeper, Rambo felt he needed to demonstrate to the lads that anything can be achieved! And sure enough, Rambo excelled in display and performance as he led the squad through the training, in awe-inspiring fashion!

Rambo, or Robert to his friends and colleagues in the Marines, was regarded as a brave, courageous and supportive soldier, who was a keystone of the group. This was no different in his presence on the football pitch to his fellow team mates. Rambo always showed great passion and devotion to his fellow Machno players on and off the pitch, always ensuring he lived life to the full and being generous to the extreme.
Besides leaving the squad with just fond memories, he also left Machno with the unmistakable “Royal Marine Imprint” which carries with it, the sheer determination and hard working mentality of an elite fighting force. That is why Machno United FC is proud to display ‘RAMBO’ on the front of their kits, and ‘We Fear No Foe’ on the reverse, which really symbolizes what Machno United believe in. 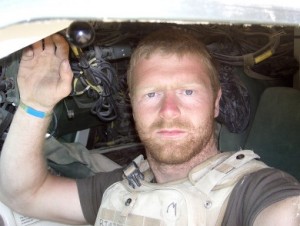