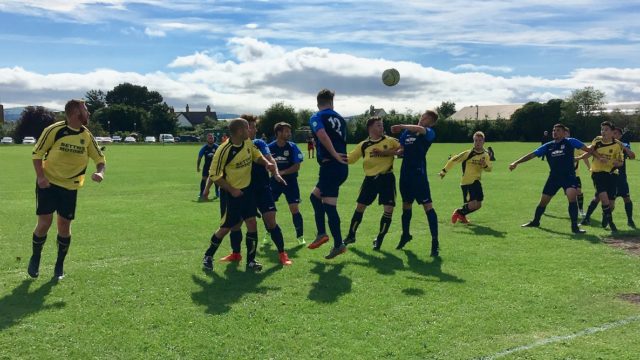 After a very positive pre-season, it was finally time for things to get serious for Machno United, as their league campaign got underway with a visit to newly promoted Rhuddlan Town.

It was nice to see such a well established club back in the premier division, and Machno knew that this was going to be a tough opener.  As the game got underway, these thoughts seemed well founded as a first minute attack by Rhuddlan nearly caught the Machno defence cold and but for some last ditch defending it may have resulted in a nightmare start!

The early scare certainly booted Machno into life and they were soon on the front foot with some pacey attacks, much the same as had characterised their play in pre-season.

A Dion Lloyd effort in the 6th minute called the Rhuddlan keeper into action, whilst a couple of minutes later Luke Roberts volleyed over the bar from a Ben Mullender free kick.

It wasn’t one way traffic though, as Rhuddlan were also dangerous on the counter attack and Mullender made a crucial challenge on the Machno penalty spot to prevent a great chance for the hosts on 10 minutes.

At the other end of the field, the front trio of Lloyd, Roberts and Callum Parry worked an opening for Parry whose effort went narrowly wide.  Just a few minutes later it was Parry who fed Roberts, and his low effort shaved the outside of the Rhuddlan keeper’s right hand post.

With both teams creating chances, and Roberts pace causing problems, this surely couldn’t remain goalless for too long!

And so it proved, as the home side took the lead on 23 minutes.  As the home side picked their way through the centre of the pitch, Ian “Cakes” Griifiths was called upon to make a vital block which resulted in a Rhuddlan corner.  As the corner was swung into the back post, Machno’s Gaz Griffiths was adjudged to have handled the ball on the bounce and referee Glenn Gray awarded the penalty.  The spot kick was coolly converted, 1-0 to Rhuddlan.

Just two minutes later Machno keeper Dec Bailey made a tremendous stop with his feet from close range, to prevent Rhuddlan from stretching their lead.

The Yellows certainly needed to regain a foothold in the match and quickly!

Once again The Trefriw Triumverate up front began to create chances.  A Parry cross on 26 minutes was taken smartly off the toes of young Dion Lloyd by the Rhuddlan keeper, and seconds later Parry was put through one on one but clipped his effort just wide.

Machno were finally back on level terms on 32 minutes as Parry’s surge of pace saw him break two tackles before rounding the Rhuddlan keeper and coolly tucking the ball away from a tight angle. 1-1. 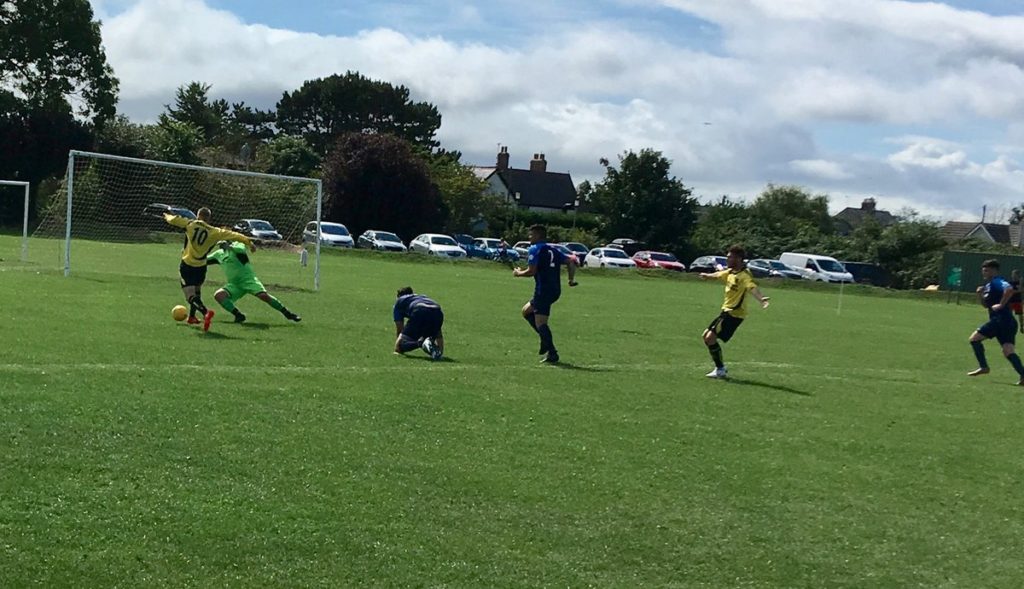 Machno were in the ascendency now and very nearly grabbed a second goal three minutes later when a long range Ben Mullender effort curled onto the far post and deflected wide.

The first half drew to a close with a further couple of efforts for both sides, but nothing that particularly troubled either keeper, whilst Machno suffered a blow with Jamie Williams being forced off with injury a few minutes before the break.

So a very even first half saw a scoreline reflecting the fact as the sides went in at one goal apiece.

Machno, determined to leave with three points from the fixture, started the second half brightly and an early Callum Parry corner was whipped in across the face of goal, narrowly evading the onrushing Sam Thomas and Dion Lloyd.

As the minutes rolled by, both goalkeepers were impressing time and again as the scoreline remained even.  However there was not much that Bailey, in the Machno goal, could do as a Rhuddlan free kick was whipped into the box and the resulting header hit his post on the hour mark.  It was a let off for Machno, and again sparked an immediate reaction as Dion Lloyd broke away impressively at the other end.  As the young striker beared down on goal, his low effort from 12 yards, was saved brilliantly by the opposing keeper’s legs.

Five minutes later the home keeper was again called into action as he made another fine save repelling a screamer of a 25 yard effort from young Sam Thomas.

The resulting corner was whipped in again by Callum Parry, but substitute Rhidian Williams was unable to convert as he met the ball from close range but skewed it narrowly wide.

The following 10 minutes were again even as the game ebbed and flowed from one end to the other, with chances aplenty for both sides. 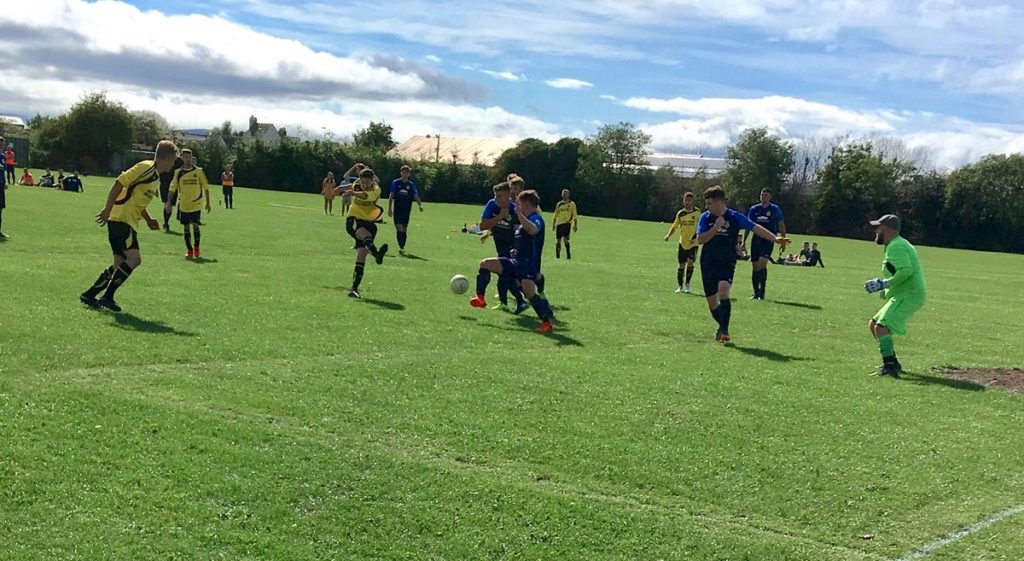 In the 78th minute the Rhuddlan keeper made perhaps the finest of all the fine saves that has been seen.  A fantastic left wing cross was swung in by Rhidian Williams and was met by the head of Parry 4 yards out, it looked all over a goal until the home keeper once again stretched out an arm and made an unbelievable point blank save.

It seemed that this reprieve really spurred on the Rhuddlan side once again, as they were in the ascendency as the match was drawing to an end.  Declan Bailey, in the Machno goal, was twice called upon to make fine saves in one on one situations.

With two minutes of normal time remaining one such save resulted in a Rhuddlan corner.  A fine delivery was swung in towards the back post, where a Rhuddlan head rose above all others and nodded into the corner of the net.  2-1 Rhuddlan.

It was a hammer blow for the Machno side hoping for a favourable result.

As a couple of minutes injury time were played out, the yellows pressed in search of a second equaliser but the game was seen out comfortably by the Rhuddlan defence.

And so a disappointing start to the season for Machno with chances missed to leave Rhyl with at least a point.  Full credit to Wayne Hughes’ Rhuddlan side for coming out on top in a competitive encounter and a real sign of the strength of the league this season.

Things do not become any easier for Machno with an upcoming trip to last season’s runners up, Llanfairfechan Town next Saturday.  COYY